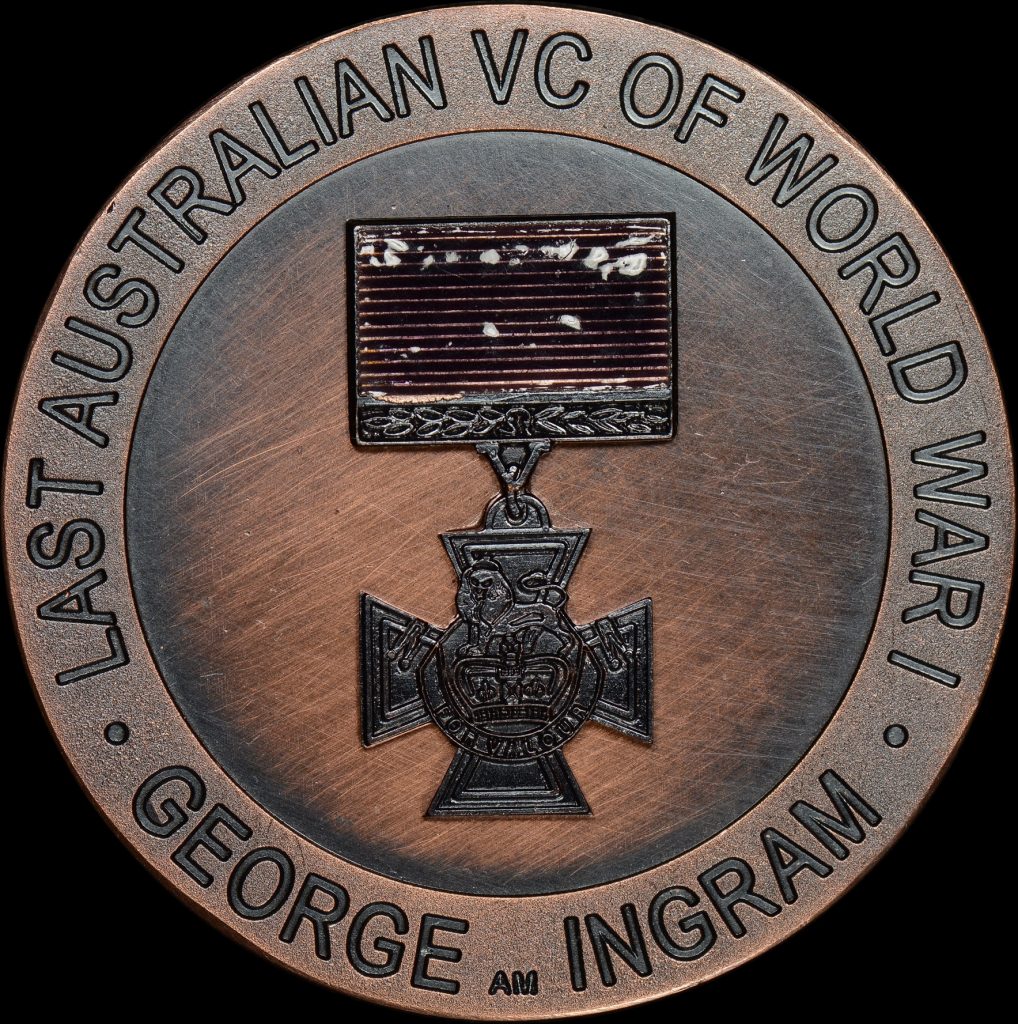 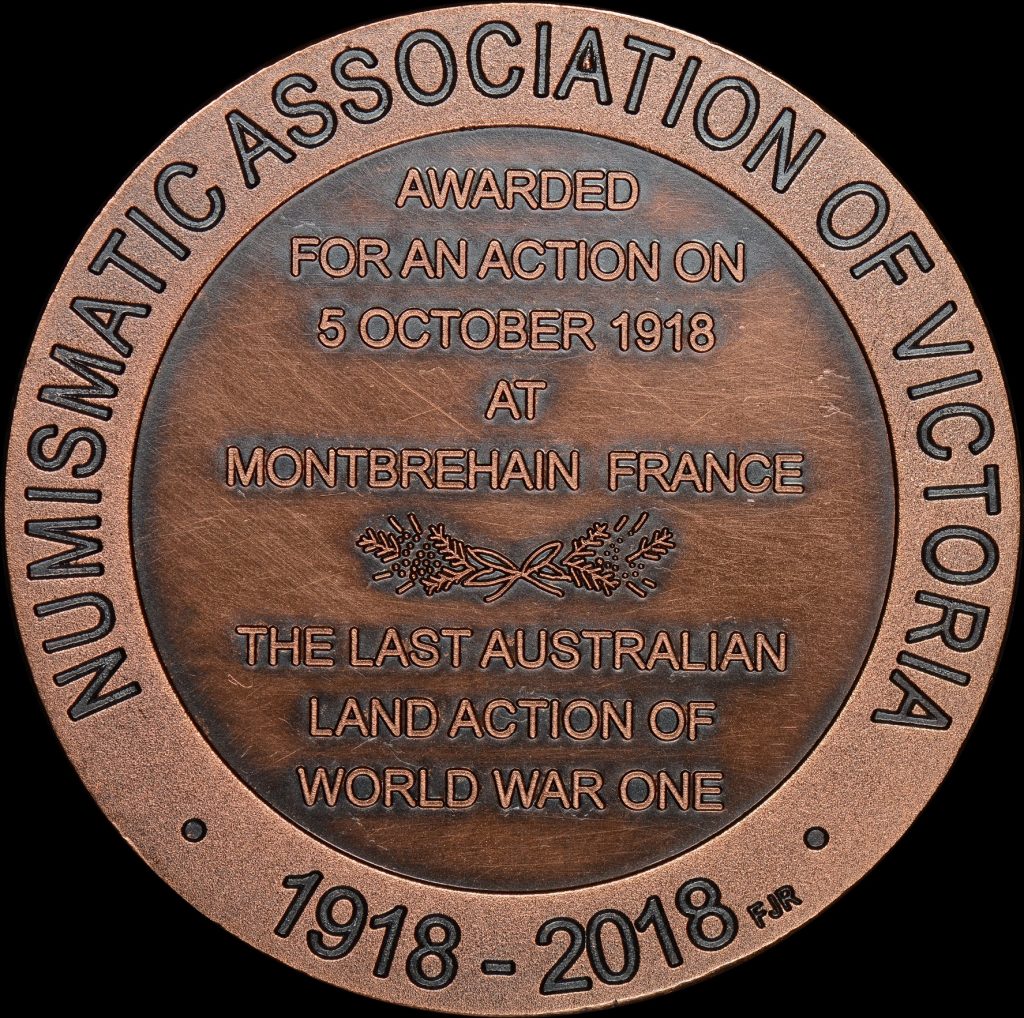 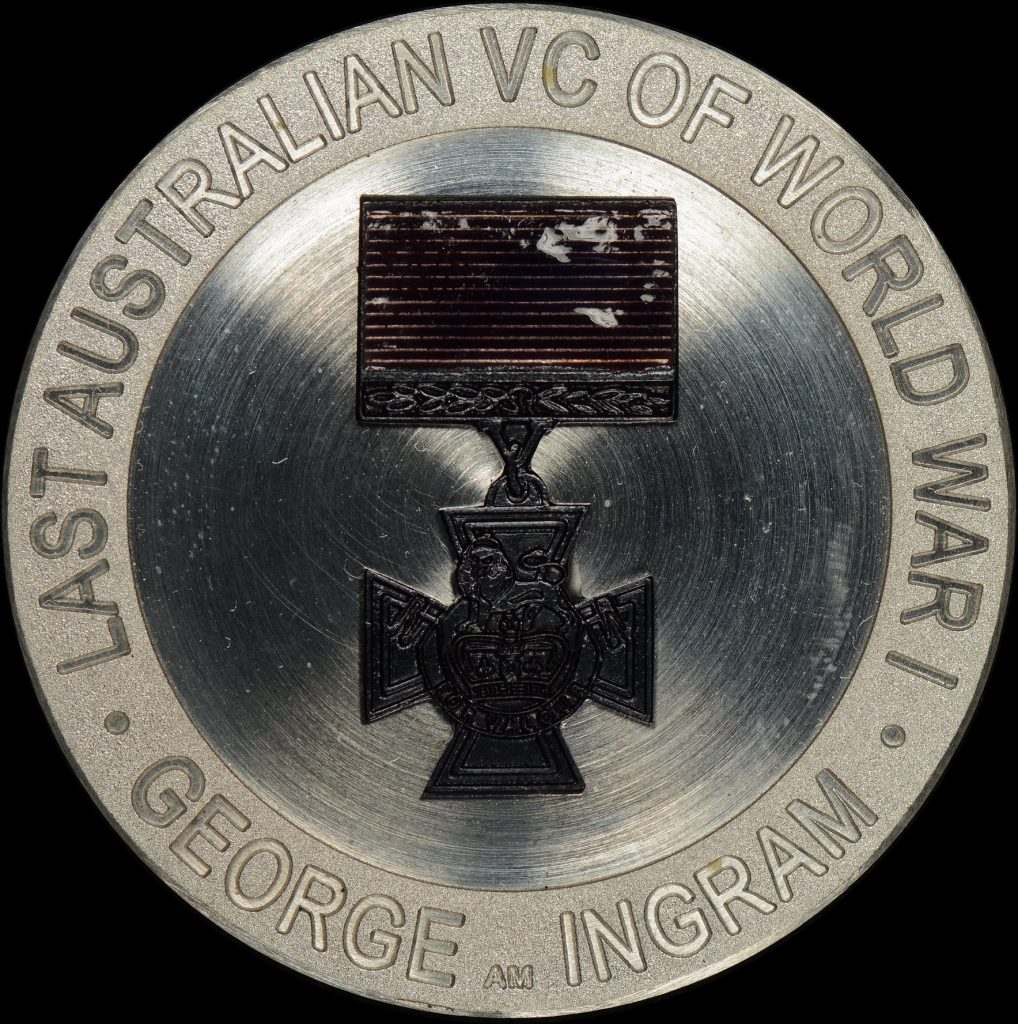 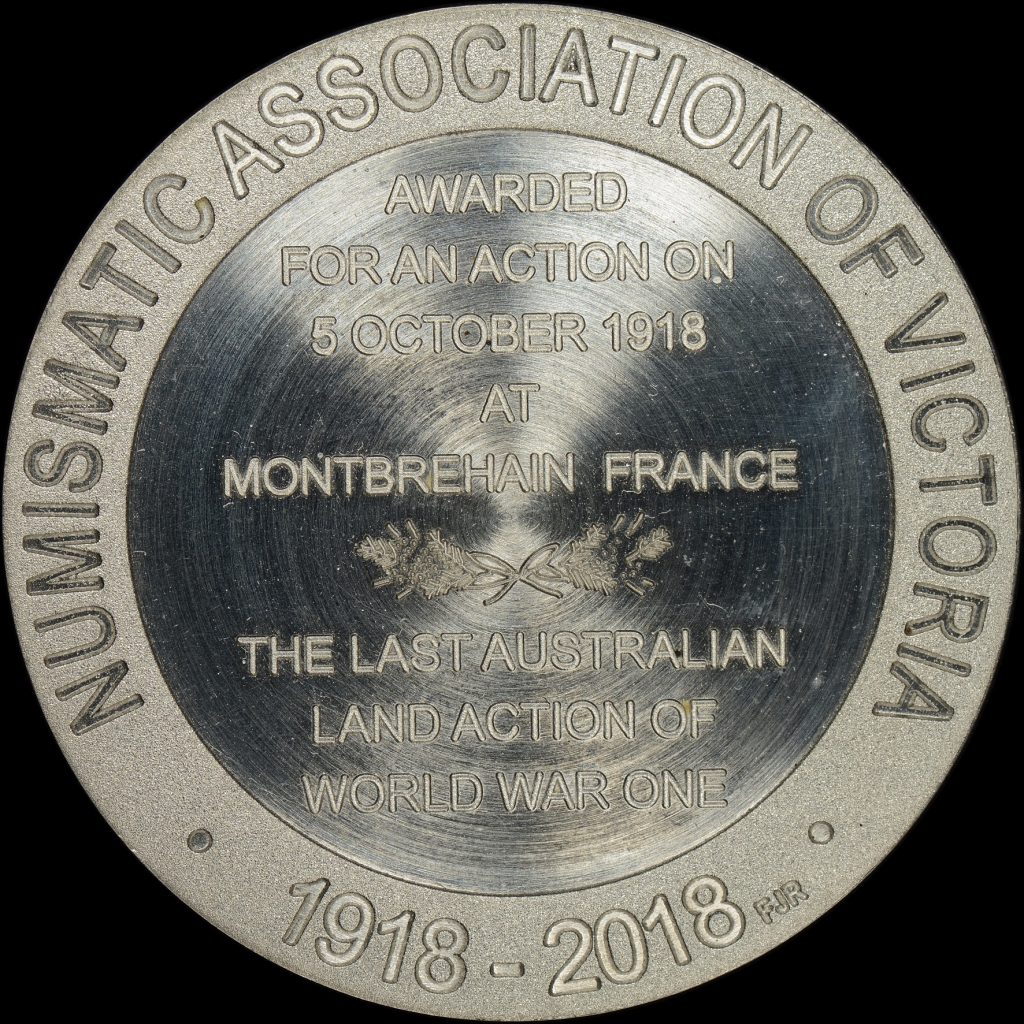 Images courtesy of The Purple Penny

This medallion commemorates the Centenary of the last Victoria Cross won by an Australian in the Great War, 1914 – 1918; awarded to Lieutenant George Ingram 24th Battalion for actions at Montbrehain, France 5th October 1918; this being the last action fought by Australian Infantry during the Great War.

After initial militia service in the artillery before the war, in December 1914 George Ingram enlisted in the Expeditionary Force that had occupied German New Guinea. In January 1916 he returned to Australia and re-enlisted in the Australian Imperial Force and sailed for France. As then Corporal Ingram, he was awarded the Military Medal for bravery, for action at Bapaume on 15th and 16th March 1917.

Rising through the ranks and commissioned in the field 2nd Lt. Ingram was recognised for a further conspicuous act of bravery by the award of the Victoria Cross. His Citation, as published in the London Gazette Supplement dated 6th January 1919, reads:

“For most conspicuous bravery and initiative during the attack on Montbrehain, East of Peronne, on 5th October 1918.

When early in the advance his platoon was held up by a strong point, Lt. Ingram, without hesitation, dashed out and rushed the post at the head of his men, capturing nine machine guns and killing 42 enemy after stubborn resistance. Later, when the company had suffered severe casualties from enemy posts, and many leaders had fallen, he at once took control of the situation, rallied his men under intense fire, and led them forward. He himself rushed the first post, shot six of the enemy, and captured a machine gun, thus overcoming serious resistance.

On two subsequent occasions he again displayed great dash and resource in the capture of enemy posts, inflicting many casualties and taking 62 prisoners.

Throughout the whole day he showed the most inspiring example of courage and leadership, and freely exposed himself regardless of danger”.

Shortly after, the Germans negotiated an Armistice with the Allied Forces and surrendered at 11am on 11th November 1918. Fighting ceased pending the formal surrender terms to be negotiated at the Peace Conference at Versailles.

George Ingram was invested with his Victoria Cross by King George V at Buckingham Palace on 15th February 1919 and returned to Melbourne in April, where his AIF appointment was terminated on 2nd June 1919.

The design concept of this 51 mm diameter medallion is by Frank Robinson, it was engraved by Ernst Fischer and struck by the Adelaide Mint in the following metals:

The Victoria Cross has been separately struck in bronze and the ribbon enamelled; this has been affixed to the obverse of the medallion.

The medallions were issued unnumbered.

The obverse of this medallion records “LAST AUSTRALIAN VC OF WORLD WAR I. GEORGE INGRAM” on an incuse surround (the first time an incuse surround has been included in a medallion by The Adelaide Mint, and possibly one of only a few ever produced as a commemorative medallion with an incuse surround, other than for an official service medal) and has the miniature Victoria Cross affixed in the centre as with the first medallion.

The reverse of the medallion highlights the date and place of the action and has the wording “NUMISMATIC ASSOCIATION OF VICTORIA” in incuse on the surround. Specifications differ only from the first medallion in the Rim, which is deeper at 4.2mm in the bronze to accommodate the incuse wording and the engraver, being Ernst Fischer, Adelaide. Permission to reproduce the image of the Victoria Cross was granted by the Office of the Official Secretary to the Governor-General.

A number of both Silver and Bronze medallions are available for purchase. Given the limited mintage there is a maximum of four Bronze and one Silver medallion per order. Orders will be sent by Australia Post, Signed Delivery. For overseas orders please contact us at contactus@nullnavic.org.au