The NAV has issued over 30 commemorative medallions since 1949. Many different subjects have been commemorated as can be seen from the full listing of the medallions issued below. Carlisle numbers, where available, have been provided.

Several of the more recent medallions are available for sale.

Carlisle numbers are listed in the two editions of Les Carisle’s work on Australian medals and medallets. 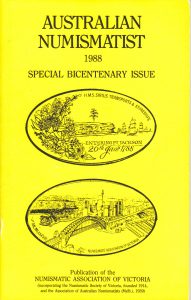 A small article, entitled “All Our Own Work“, discussing some the NAV’s medallions, appeared in the 1988 edition of the Australian Numismatist, the NAV’s journal at that time. This is available as a PDF by selecting the cover image.

A more in depth article appeared in the 1996 edition of the Australian Numismatist, from which some of the information here has been sourced.