This medallion was issued to commemorate centenary of the Burke and Wills expedition which was the first to cross Australia from South to North.

The early settlement of Australia was around the coastal fringes.  As settlers sought more land for grazing cattle and sheep, and also for growing crops, explorers penetrated further into the interior of the continent.  A significant cash prize was offered for the first exploring party to cross the continent from south to north.  The newly formed Royal Society of Victoria sponsored the Victorian Exploring Expedition, led by Robert O’Hara Burke, left Melbourne on 20 August 1860 and reached Menindee (on the Darling River in New South Wales) on 14 October.  On 19 October, part of the expedition headed northwest and established a depot on Cooper Creek on 11 November.  William Wright, the third in command, had been instructed to follow with the supplies at the first opportunity; however he delayed leaving Medindie until 26 January 1861.

Leaving William Brahe in charge of the Depot, Burke, long with William John Wills (second in command), John King, and Charles Grey had headed north on 16 December 1860 and reached the Gulf of Carpentaria on 11 February 1861 becoming the first to cross the continent from south to north.  On the return trip to Coopers Creek, Grey died on 17 April.  The other three reached the Depot late on 21 April only hours after the rest of the Expedition had left that morning!  Instead of following Brahe’s party back to Medindie (650 km without water), the explorers followed Cooper Creek downstream (with the idea of eventually getting to Adelaide via Mt Hopeless, 250 km away, where there was a police outpost).  However without sufficient food, both Burke and Wills died (late June / early July).  Aborigines cared for King until Alfred William Howitt’s exploring party (searching for the missing explorers) was led to him on 15 September 1861; King was then taken back to Melbourne where he recovered.

This 38 mm diameter medallion was designed by W E Curran and struck by K G Luke, Melbourne in the following metals:

Trial lead strikes exist for both obverse and reverse.

The Melbourne City Council (MCC) struck 100 bronze medallions using the NAV obverse.  The reverse of the MCC medallion was one they designed for presentation to Councillors, Institutions and for Awards to school-children (for an essay competition about the expedition).  One of the NAV silver medallions was presented to the Melbourne City Council and was accepted by Councillor Solly, who in return presented one of the MCC medallions to the NAV on 18 August 1960. 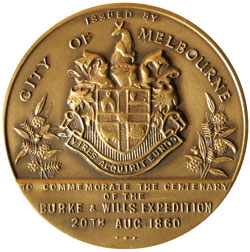 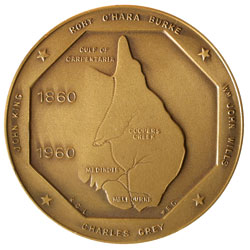 The obverse design features a map of eastern Australia showing the route the explorers followed, with the dates “1860” and “1960” and the names of the four explorers (Robert O’Hara burke, William John Wills, John King, and Charles Grey) around the outside.

The reverse design consists of the legend “STRUCK TO COMMEMORATE THE CENTENARY OF BURKE & WILLS THE FIRST EXPEDITION TO CROSS THE CONTINENT OF AUSTRALIA FROM SOUTH TO NORTH.  LEFT MELBOURNE 20-8-1860 REACHED GULF 11-2-1861 NUMISMATIC ASSOCIATION OF VICTORIA”.