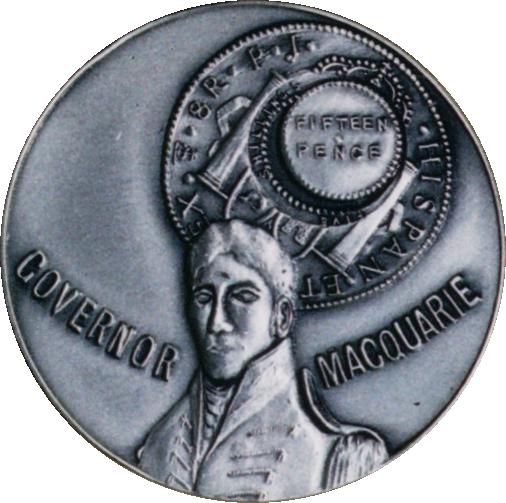 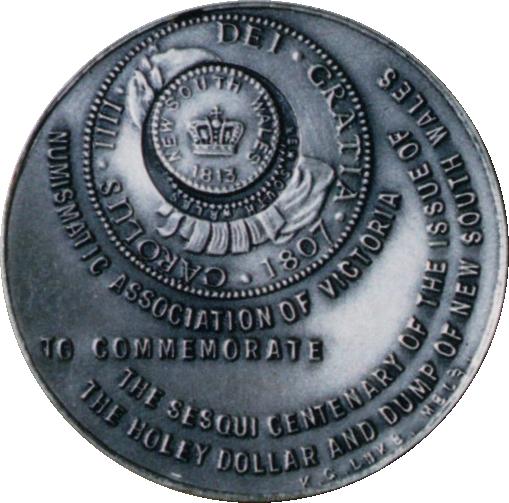 This medallion was issued to commemorate the 150th anniversary of the issue of the holey dollar and dump in 1813 (which was Australia’s first coinage).

With the establishment of a penal colony at Sydney, and later at Hobart, coinage was not initially considered necessary.  With the failure of earlier attempts to inflate the value of coins circulating in the Colony, Governor Lachlan Macquarie requested a supply of coinage; as a result, he received 40 000 Spanish silver “dollars” (or pieces of eight reales) on 26 November 1812 in the sloop Samarang.  Macquarie decided to mutilate these coins by making two coins out of each “dollar” in a similar way to what he had previously seen in the West Indies.

William Henshall, a convicted forger, was given the task of converting the “dollars” into the two new coins; this involved punching the centre out of each piece, preparing the dies, “stamping” (ie striking), and “graining” (ie milling).

The centre piece (now known as the “dump”) had its original design obliterated and struck with a crown and the legend “NEW SOUTH WALES” “1813” on one side (obverse) and “FIFTEEN PENCE” on the other side (reverse).

This 38 mm diameter medallion was designed by Ray Jewell and struck by K G Luke, Melbourne in one metal:

Trial strikes are known to exist in lead for both obverse and reverse (that is two separate trials).

The obverse design features the bust of Governor Macquarie with the reverse of both a holey dollar and a dump and the legend “GOVERNOR MACQUARIE”.

The reverse design features the obverse of both a holey dollar and a dump and the legend “NUMISMATIC ASSOCIATION OF VICTORIA” curved below and “TO COMMEMORATE” across and “THE SESQUI CENTENARY OF THE ISSUE OF” “THE HOLEY DOLLAR AND DUMP OF NEW SOUTH WALES” “K.G. LUKE. MELB.” in three curved lines below.