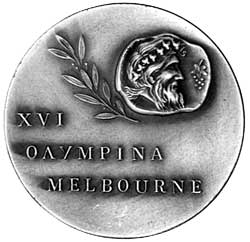 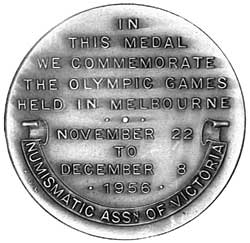 This medallion was issued to commemorate the Olympic Games in Melbourne in 1956.

These Games of the 16th Olympiad were held from 22 November to 8 December 1956 and were the first Olympic Games to be held in the southern hemisphere.  However, due to Australian quarantine regulations, the equestrian events were held in Stockholm, Sweden in June.

This 38 mm diameter medallion was designed and struck by K G Luke, Melbourne in the following metals:

Seven trial strikes are known to exist in lead for both obverse and reverse.

The obverse design features an ancient Greek coin showing the head of Bacchus (rather than the head of Zeus) with a laurel branch and the legend “XVI ΟΛΥΜΡΙΝΑ Melbourne” – an interesting mixture of Greek, Latin, and English!

The reverse design has the text: “IN THIS MEDAL WE COMMEMORATE THE OLYMPIC GAMES IN MELBOURNE NOVEMBER 22 TO DECEMBER 8 1956” in the centre and with “NUMISMATIC ASSN OF VICTORIA” below on a scroll.