Listed in Carlisle[1] as M/6 the Melbourne & Hobsons Bay Railway commemorative medallion in an interesting and somewhat familiar piece. Interesting in that many sources, including Carlisle and Museum’s Victoria, have understandably assumed a much earlier date than when the piece was actually issued; and familiar as it formed the basis for a sequel issued by the Numismatic Association of Victoria in 1954 (C-1954/15).

Running from Flinders Street in Melbourne to Sandridge (Port Melbourne), construction of the 4km stretch of railway started in March of 1853 and opened to great ceremony on 12th September 1854, this being the first steam railway in Australia[2]. On board that first trip were a number of VIPs, including Lieutenant-Governor Sir Charles Hotham and his wife Jane Sarah. It took ten minutes for the locally built locomotive to cover the distance, and travellers were hailed with gun-salutes from HMS Electra and HMS Fantome on arrival.

Most sources have assumed that the medallion was issued to commemorate the 60th anniversary of the opening of the railway, putting it around 1914. However research has shown it was originally conceived in 1922 and made its first appearance, at least in print, in 1923. In an article in The Australasian paper from September 1922, it was reported that “September 19 (sic) was the sixty-eighth anniversary of the opening of the first railway in Australia – Melbourne to Sandridge – and the Numismatic Society of Victoria (NSV), at its meeting on Thursday evening, decided to have a medal struck to commemorate the event (VICTORIAN NEWS, 1922)”.

Minutes from the General Meeting of the NSV, held on 12th September, confirm that a motion by W.A. Hall (then Vice President) suggested that the society should “take in to consideration the advisability of having a medal struck to commemorate the opening of the first Railway in Australia, that the council go in to the matter and report to a later meeting”.

On 3rd October a special Council Meeting was held at prominent numismatist Alfred Chitty’s house to discuss the matter further. Mr Schafer supplied some indicative costs from Stokes & Sons, and Mr. Chitty was keen to point out that this was not only the first railway in Victoria, but the first in the whole of Australia.

Mr Gardner thought that a more appropriate subject for the society to commemorate would be the jubilee of the opening of the Melbourne Mint, which had opened fifty years earlier in 1872. Other suggestions for events to commemorate were the incorporation of the City of Melbourne (1842) and the separation of Victoria from New South Wales (1851).

Both of these latter events in Victorian history were eventually commemorated in medallic form. The centenary of the incorporation of the City of Melbourne Medallion (C-1942/2) was issued by the city itself, and the story of its production is detailed in the latest edition of the Journal of the Numismatic Association of Australia (JNAA 29).  The centenary of separation was eventually commemorated by the NSV’s successor, the NAV, with a beautifully designed piece by Andor Meszaros (C-S/2), which also commemorated the 50th anniversary of Federation. 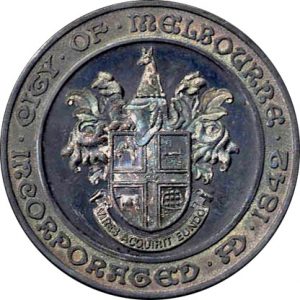 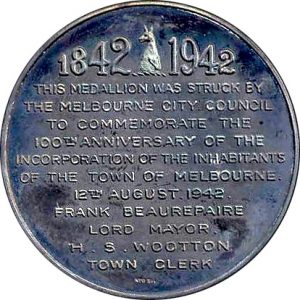 So keen was Mr. Chitty on the idea of the Society issuing a commemorative medallion that he donated £5 to defray the cost of production on the proviso that “it must be in commemoration of the first Australian railway”. At the next general meeting of the NSV, on 10th October, the issue was discussed further and quotations were sought “for not more than 100 medallions in bronze, size to be that of a British Crown piece[3]”.

On 14th November the numbers came back, “6/ each if 100 medals were taken (possibly it might only be 5/). This meant that the total cost would be £25 ”. Discussions were held on possible ways to cover the costs “but it was the opinion that the return to the Society would not be commensurate with the cost”. To this end Mr. Fisher (President) moved “that we cannot see our way to adopting the proposal of Mr A. Chitty by issuing a medal to celebrate the 68th anniversary of the inception of Australian railways” and that “Mr. Chitty be advised by letter and his donation returned with many thanks”.

Chitty and Hall were clearly not deterred by this setback, as is evidenced by the medallions very existence. The first mention of the finished medallion can be found in an illustrated article on Old Melbourne Memories from The Argus dated 14th April 1923. The author notes that “to commemorate the opening of the Numismatic Society lately[4], a limited number of medals were struck, and through the kindness of Mr. William Alfred Hall, one of the vice-presidents, his medal has been placed at my disposal to make an illustration from. This is the first time that an illustration of the medal has been published. Speaking of the old Hobson’s Bay railway, Mr. Hall recalls that in those early days there was such a scarcity of copper coinage that the company had to give their passengers paper tokens in place of coins. He has a photograph of two of these curious relics. One looks much like the half of a return ticket, and the other is circular in shape. On both is printed, ‘Pay the bearer one halfpenny.’”

The design of the obverse is based on a drawing of the event by Samuel Thomas (S.T.) Gill (1818-1880), entitled The City of Terminus of the M. & H.B. Railway Co. 1854[5]. Unlike the sketch however the medallion doesn’t feature any people and depicts two sets of parallel sleepered tracks rather than the siding depicted in the original. At the base of the scene on the medallion are three sets of initials that help identify the people involved in its creation. A.C. (Alfred Chitty), S & S (Stokes & Sons, the makers) and W.A.H. (William Alfred Hall). The legend reads “Melbourne & Hobsons Bay Railway Station Flinders Street.” The reverse text, in fifteen lines, is in two halves. The first part notes the commemoration of the opening of the Melbourne to Sandridge line. The second half mentions the openings of other key Victorian railways, these being Melbourne to Geelong and Melbourne to St. Kilda (1857); Melbourne to Williamstown (1859); and Melbourne to Essendon (1860). 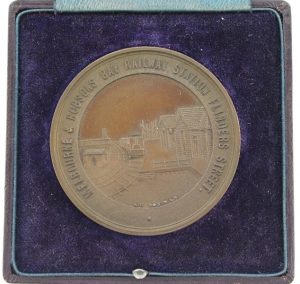 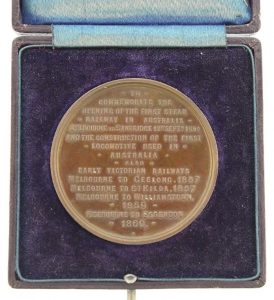 After the publication of this article Chitty was quick to correct the author on the origins of the piece. “The medal was a joint design and issue by William Alfred Hall F.A.I., and myself, a purely private issue limited to 50 specimens, the Numismatic Society having nothing to do with it.[6] “. At the NSV meeting on the 8th May W.A. Hall exhibited the “medal recently issued by himself and Mr. Chitty (Numismatic Society of Victoria, 1922-23)”, which clearly dates the piece to 1923.

The 51mm bronze piece I recently acquired came neatly packed in a jeweller’s box from J.R. Rowland, 336 Collins Street, Melbourne. With a mintage of only fifty these pieces can be scares with only seven sales recorded by Nobles since 1998.

In 1954 the NAV issued its fourth medallion to commemorate the centenary of the railway’s opening. Struck again by Stokes, the obverse design is almost identical to the Chitty/Hall piece. “Stokes Melb” replaces Chitty and Hall’s initials and there is no legend. The reverse proclaims that “this Medallion was struck to commemorate the centenary of the first opening for the first steam railway in Australia on September 12th 1854”.

This smaller, 38mm medallion was issued in two metals, each individually numbered on the edge. There were forty struck in Sterling Silver (numbered 1 to 40) and sixty in oxidised bronze (numbered 41 to 100). Three trial strikes are believed to exist in lead for both obverse and reverse.

Like all medallions issued by the NAV details of this piece can be readily found on the NAV Website.

The 1988 Special Bicentenary Issue of the NAV’s journal, The Australian Numismatist, there is an article entitled “The First Railway”, which goes in to more depth of the history of the railway and its opening.

[2] South Australians will be at pains to point out that the Goolwa to Pt. Elliot railway was the first passenger line in the country, when it opened on 1 May 1854. However that was a horse-drawn service and therefore not nearly as exciting.