This medallion was issued to commemorate the Centenary of the issue of the first copper token in Australia.

Throughout the 19th century, Australia consisted of a number of colonies of Great Britain.  These colonies relied on the mother country to supply them with coinage to enable normal commerce to be carried out.  However the output of the Royal Mint (in London) was insufficient and traders often suffered from serious shortages of small change.  In earlier times in Great Britain, various municipalities had issued tokens which circulated to provide the necessary change.

In 1849, Annand, Smith & Co, a grocer in Melbourne (Victoria), had a supply of one penny tokens struck from copper and these were first issued in October 1849.  Over the next 25 years, approximately 120 firms (tradesmen) issued tokens in the Australian colonies; most of these were pennies with a significant number of half pennies (½ penny) and a few silver threepences (3 pence).  Until 1860, regal pennies and half pennies were copper; after that year they mostly struck from bronze in a smaller size; similarly, the penny and half penny tokens were struck from copper until the early 1860s and after that, they e struck from bronze.

While these (and the many other) tokens were always illegal, they were tolerated by the Colonial Governments until the Home Government (in Great Britain) was able to supply sufficient regal coin.  The issue of the tokens meant a profit for the issuer, free advertising for the issuer, and circulating small change.

This 41 mm diameter medallion was designed by Roy Farman (of the NAV) and struck by Stokes & Sons, Melbourne; it was struck in one metal and was issued unnumbered:

The Annand, Smith & Co token has the name and address of the issuer on the obverse and Britannia on the reverse.  This representation of Britannia had been prepared by Küchler (of the Soho Mint) for a proof pattern penny of 1806.  The design is very similar to that on the then current British penny. 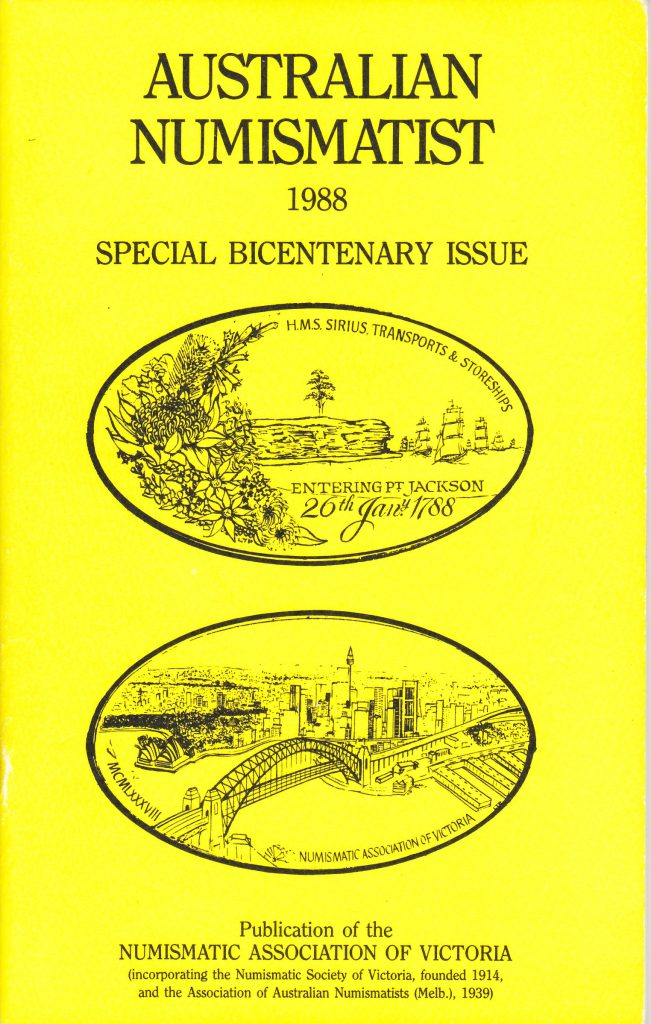 An article on Annand, Smith & Co. appeared in the 1988 edition of the Australian Numismatist, the NAV’s journal of the time. A pdf file of this article can be accessed by selecting the cover of the journal pictured.